Band Of The Month September 2019 Get Tickets
7

£5 plus booking fee available from Eventbrite

Rio Gold are our Band Of The Month for September. We caught up with vocalist Patrick for a chat.

Whittles: You’re a relatively new band, where did the idea for a Spandau / Duran Duran Tribute band come from?

Yes we are a Relatively new band in fact we had the meeting to do this Tribute Band just 12 months ago on 5th September 2018.

The idea of forming a Spandau Ballet and Duran Duran tribute band had been something I wanted to do for quite a while but I hadn’t had the opportunity to do this.

Previous to RIO Gold I was in a band called ASIS for many years and we were very successful in our field as a rock/pop covers band but this band would not really have been suitable for an 80’s Spandau Ballet/ Duran Duran Tribute as for starters we didn’t have a current keyboard player (although ASIS had  a few keyboard players in the past) However after a period of time (years) like many bands we split… but this then gave me the opportunity to form the Tribute band I wanted to be part of.

I’ve always been a big fan of both bands Spandau and Duran so I got together the line up I needed. ie, Vocals/sax, Bass, Guitar, Keyboards and Drums.

Rio Gold was then formed and as this was my passion I made sure it was a good show as at each of our events we have a top pro PA system and an extensive light show as the band has 2 dedicated engineers one for lights and one for sound.

Whittles: What do you guys do when you’re not on stage?

As for what do the guys in the band do when they are not performing we have; a chemist, 2 Engineers, a Sales rep, and Pro Photographer plus others.

Whittles: We notice you supported Martin Kemp recently what did he think of your act? Did you meet him? Did he perform with you?

We performed at the same festival just last month with Martin Kemp (Spandau Ballet) plus Musical Youth and Nathan Moore (Brother Beyond). As this was an eighties festival, which was a great gig, we were well received by the audience.

We were chatting back stage with all the acts after our performance and they were all very complementary. Martin Kemp loved it… and he was such a nice down to earth guy… in fact they all were. 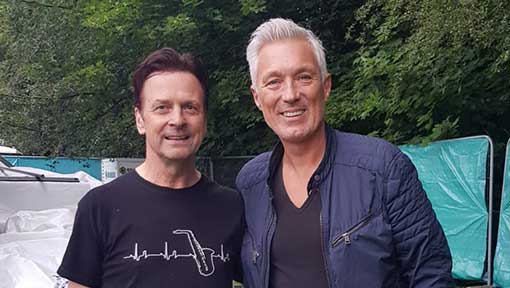 Whittles: You’re a regular at the Whittles Jam playing the sax how long have you played the sax and do you play any other instruments?

You may have noticed that I have been to the jam Sundays at Whittles a few times ( I’m the one playing the tenor sax) and its a really good jam session I always enjoy it so if you get chance you musicians and singers have a go yourself.

I have been playing sax now for about 25 years but I also play; Guitar, Keyboards, Harmonica and Clarinet. I have to admit that saxophone is of course my favourite even though my first instrument like a lot of people was Guitar.

I guess my favourite Spandau Ballet song is ‘Fly For You’, although there are many that I do like. As for Duran Duran for me its ‘Girls on Film’ I really like the energy of this song (and the Girls always like it so that’s a plus)

I like all types of music from rock to classical and what is my favourite classical (The Planets Suite by Gustav Holst) …. you didn’t expect that one!

Whittles: Any message for the gig goers of Oldham?

My message to the gig goers of Oldham is this.. Support your live music venues it you the audience that enviably keeps the venue going because in my experience once a venue has gone it hardly ever comes back.

Anyway on a lighter note come and watch RIO GOLD playing hits from Spandau Ballet/ Duran Duran  and we even throw some other eighties tunes in on the second half for good measure. It’s all live its all fun come along and enjoy.

Check out our full gig listings. We have a wide range of music on offer so there’s always something to take your fancy.